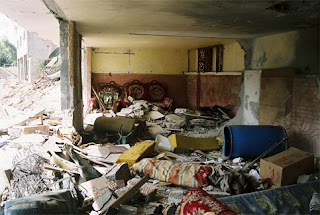 ei: West Bank camp incursion causes destruction, fear: "EIN BEIT ALMA, 26 September (IRIN) - Residents of the Ein Beit Alma refugee camp began to pick up the pieces after an intense Israeli military incursion last week left dozens homeless, and many very frightened, especially children. The fighting with Palestinian militants also caused damage to sewer systems, residents said. Muhammed Msaimi, aged 26, hid for over a day with his wife and three children in the bathroom because of gunfights which took place outside their apartment. However, the bullets found their way into that room as well, and they crawled behind a thick wall, Msaimi, a registered refugee, said."

July 15, 2007
TomDispatch: "Okay, it's another lemon, the second you've bought from the same used-car lot -- and for $1,000 more than the first. The transmission is a mess; the muffler's clunking; smoke's seeping out of the dashboard; and you've only had it a week. You took it, grudgingly, as a replacement for that beat-up old Camry that only lasted two months, but the salesman assured you it was a winner. No wonder you're driving onto the lot right now. Before you can even complain, the same salesman's there. He's firm. It's not his fault. You must have done something. Nonetheless, he's ready to offer you a great deal. For an extra 2,000 bucks, you can have the rusted-out Honda Prelude right behind him, the one that, as a matter of fact, has just burst into flames -- and, he assures you, it's a dandy. It may not look so great today, what with the smoking hood and all, but it's a vehicle for the ages.
Would you buy a used car from this man? (Hint…
Post a Comment
Read more