Can there be any doubt who the real terrorists are? US definition fits perfectly :: www.uruknet.info :: informazione dall'Iraq occupato :: news from occupied Iraq :: - it 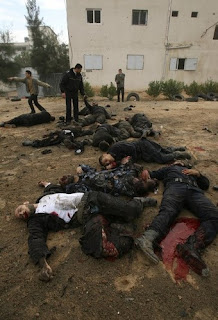 Can there be any doubt who the real terrorists are? US definition fits perfectly :: www.uruknet.info :: informazione dall'Iraq occupato :: news from occupied Iraq :: - it: "December 27, 2008

The patience of all decent men must surely be exhausted.

Today’s slaughter of innocents in Gaza, with at least 230 reported killed in raids on 'Hamas terror operatives' (as the Israeli military put it), amounted to 'a mass execution', said Hamas.

Can there now be any doubt who the real terrorists are?

The killing spree couldn’t have happened without the tacit approval of America, Britain and the EU. The political pea-brains that direct the pro-Israel western alliance were partying, gorging themselves on Christmas fare or binge-shopping while this massacre of hungry women and children and their despairing menfolk in Gaza was being planned and executed.

According to the US's own definition of terrorism Israel is squarely in the frame. Under Section 3 of Executive Order 13224 'Blocking Property and prohibiting Transactions with Persons who commit, threaten to commit, or support Terrorism', the term 'terrorism' means an activity that…

(i) involves a violent act or an act dangerous to human life, property, or infrastructure; and
(ii) appears to be intended

July 15, 2007
TomDispatch: "Okay, it's another lemon, the second you've bought from the same used-car lot -- and for $1,000 more than the first. The transmission is a mess; the muffler's clunking; smoke's seeping out of the dashboard; and you've only had it a week. You took it, grudgingly, as a replacement for that beat-up old Camry that only lasted two months, but the salesman assured you it was a winner. No wonder you're driving onto the lot right now. Before you can even complain, the same salesman's there. He's firm. It's not his fault. You must have done something. Nonetheless, he's ready to offer you a great deal. For an extra 2,000 bucks, you can have the rusted-out Honda Prelude right behind him, the one that, as a matter of fact, has just burst into flames -- and, he assures you, it's a dandy. It may not look so great today, what with the smoking hood and all, but it's a vehicle for the ages.
Would you buy a used car from this man? (Hint…
Post a Comment
Read more