ei: Gaza massacres must spur us to action 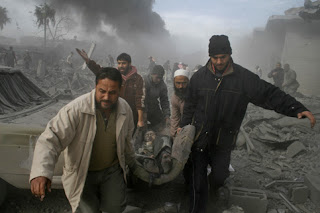 ei: Gaza massacres must spur us to action: "'I will play music and celebrate what the Israeli air force is doing.' Those were the words, spoken on Al Jazeera today by Ofer Shmerling, an Israeli civil defense official in the Sderot area adjacent to Gaza, as images of Israel's latest massacres were broadcast around the world.

A short time earlier, US-supplied Israeli F-16 warplanes and Apache helicopters dropped over 100 bombs on dozens of locations in the Israeli-occupied Gaza Strip killing at least 195 persons and injuring hundreds more. Many of these locations were police stations located, like police stations the world over, in the middle of civilian areas. The US government was one of the first to offer its support for Israel's attacks, and others will follow.

Reports said that many of the dead were Palestinian police officers. Among those Israel labels 'terrorists' were more than a dozen traffic police officers undergoing training. An as yet unknown number of civilians were killed and injured; Al Jazeera showed images of several dead children, and the Israeli attacks came at the time thousands of Palestinian children were in the streets on their way home from school."

U.S. Attacks Syrian Government Forces - It Now Has To Make Its Choice

May 19, 2017
U.S. Attacks Syrian Government Forces - It Now Has To Make Its Choice
Post a Comment
Read more